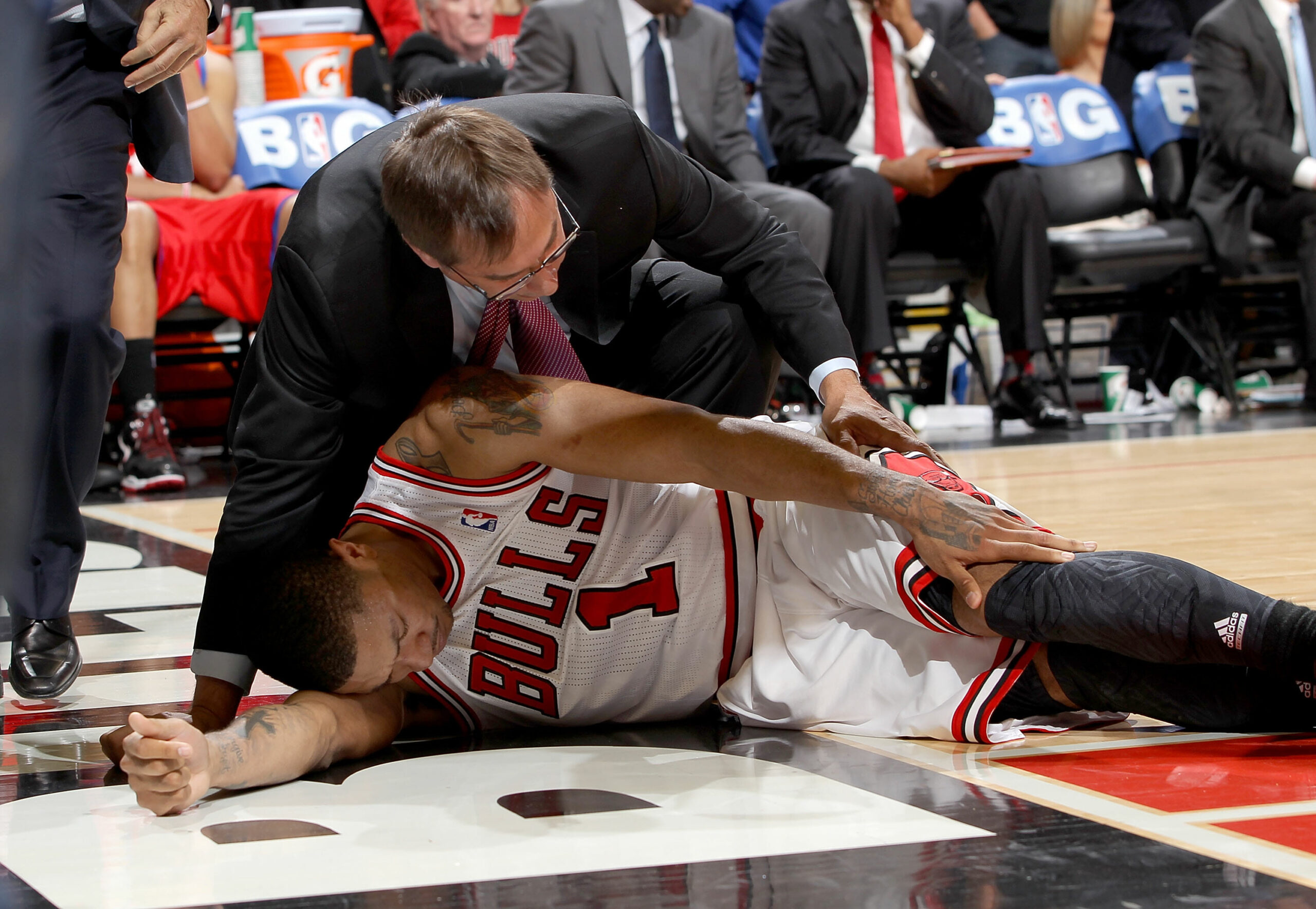 Knees are complicated. We picture them as simply flexing and extending during activity, but there are infinite subtle angles of rotation depending on the position of the knee. During bending, jumping and running tasks, tremendous forces get transferred through these joint surfaces and surrounding muscles and tissues. If these structures are not finely-tuned the chances of injury can increase dramatically.
This has been the case for 2011 NBA MVP Derrick Rose. In April 2012, he suffered a left ACL tear while landing and pivoting on his knee. After 18 months he returned to the NBA, only to suffer a right meniscus tear less than two months later. Rose started this season healthy, and played 46 games before re-tearing his right meniscus earlier this week. It’s been a devastating series of events for one of the best players in the NBA.
Derrick Rose jumps higher, runs faster, and challenges his body in ways that you and I never will. However, his string of injuries highlights several common issues we can all learn from.
Firstly, all of his injuries have been non-contact. This means that there were no external forces impacting his leg and knee, only the forces he generated by himself. Our nervous system is equipped with a vast network of sensors to give us an awareness of where our body is in space and what each moving part is doing. This sensation is called proprioception and is highly integrated with the motor systems to generate coordinated movements. Think of the many micro-adjustments you make when you slowly reach out to pick something up. Non-contact injuries suggest that these systems aren’t fine-tuned to one another, and when playing at the speed of an NBA guard, the results can be disastrous. The extra forces that your body is not prepared to absorb end up transferring to structures such as ligaments and cartilage that can undergo significant damage.
Secondly, Rose’s initial injury was his left knee, while his second and third have been on his right side. This illustrates what existing research is telling us – that both sides are at increased risk following an initial injury. Even if your strength, balance, and range of motion return to normal, subtle differences in movement patterns and weight distribution may remain. There are many nerve reflexes that can inhibit muscle activation in certain positions resulting in greater stresses on other joints and limbs. Natural protective instincts kick in leading to increased use of the uninjured leg. To complicate things further, neither ACLs nor menisci heal particularly well; the ACL is typically replaced with a graft, while the meniscus tear is usually just trimmed away. Knee surgery is simply the jump start to a lengthy recovery and a lifetime of maintenance.
Derrick Rose was voted the most valuable player in the league just a few years ago – you don’t get to that level without pushing your body past its limits. He undoubtedly got excellent rehab that led to greater strength and balance than ever before, and for the average athlete (and for most professionals too) that would have been more than enough. Unfortunately, the demands of playing at the NBA level, coupled with Rose’s aggressive play style have been too much for his knees to handle. Does this mean rehab doesn’t work? Not quite. Rehab can get you back in the game, but at the end of the day playing at Rose’s level following multiple surgeries exposed him to a higher chance of something going wrong.
If I had to leave you with a single message it would be this: Don’t let old injuries slow you down, in most cases it is possible to get back to the activities you love, but to decrease the risk of future injury you must first make sure you properly address old ones.
Have you ever had an old injury come back to bite you? What kind of proactive approaches have you taken following injury? Share your thoughts and experiences in the comments below!
All the best,
Dan
Tags : acupuncture, anatomy, athlete, electroacupuncture, injury, injury prevention, knee, muscle, nervous system, patella, physio, physiotherapy in leaside, prevention, recovery, tissue